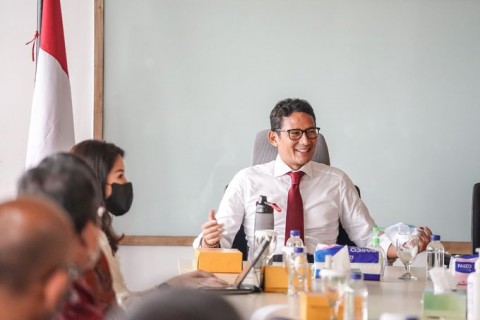 "We saw vast potential for collaboration in the music sector as well as culinary arts, fashion, and art performance," he noted during a press statement on Thursday.
BERITA TERKAIT

"We also plan to showcase Indonesia's best film during the Indonesia Film Festival event in Melbourne," he remarked while meeting with a member of the Australia-Indonesia Institute Board here on Wednesday.

The meeting was held to explore expansion and new opportunities for cooperation related to the efforts to recover the tourism and creative economy sectors in both nations during the post-COVID-19 pandemic era.

Moreover, Uno expressed his keenness over an update to the cooperation memorandum of understanding in the tourism and creative economy sectors, especially in the education sector.

With this, the international classes between the two countries can be reopened that would facilitate student exchange and internship programs to be held.

Earlier, Indonesia and Australia had inked a memorandum of understanding in tourism cooperation in June 2011 that ended in 2018.

Through the opportunity, the minister expects the participation of Australia-Indonesia Institute Board members in the G20 Summit side event: the World Conference on Creative Economy on October 5-7, 2022, in Bali.

"Moreover, there are the World Tourism Day and International Wellness Tourism Conference and Festival. We expect Australia to participate in these events," he remarked.

With the existence of the international borders opening policy due to the COVID-19 pandemic situation being under control, President Joko Widodo has allowed people to go mask-free while conducting activities outdoors.

"We had also allowed various relaxations for international tourists, who had received complete vaccination, such as eliminating antigen and PCR tests during arrival," Uno remarked.

This was done based on the Eid al-Fitr holiday momentum that proceeds well that led to gradual policy relaxation. At the end of the day, the tourists' safety and health are priorities that must be taken into account, he stated.