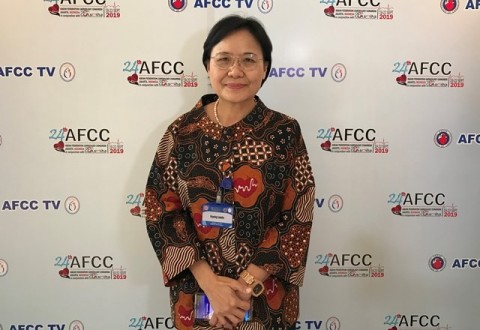 Chairperson of Organizing Committee of AFCC Antonia Anna Lukito (Photo: Medcom.id/Raka Lestari)
Tangerang: The ASEAN Federation of Cardiology Congress (AFCC) is holding it's 24th annual congress this year. The event is being held at the Indonesia Convention Exhibition (ICE) in BSD City, Tangerang for four days starting from Thursday, September 19, 2019 to Sunday, September 22, 2019.

"Initially this event was held every two years, but because many countries wanted to host this event it became a yearly event," said Antonia, in the BSD City area, Thursday, September 19, 2019.

"We want to say that ASEAN  has the same quality of heart doctors as other countries, our doctors are on the same level. But since we are a developing country, the problems are different from developed countries, "said Dr. Antonia.

This event is expected to showcase various kinds of heart treatments using the latest technologies.

"For example, in the past operation of heart valves was always surgical, now there are many alternatives without surgery. A heart valve replacement without surgery can be done. There have been many developments, ranging from heart rhythm, congenital heart disease, heart rheumatism, and broken blood vessels can also be done without surgery. Previously it always had to be done through surgery, "said Dr. Antonia.
BERITA TERKAIT

"Yesterday we just returned from the World Heart Federation (WHF). The Federation discussed the global target of the WHF, that in 2030 the world must reduce cardiovascular disease by 30 percent from now," explained Dr. Antonia when talking with Medcom.id at BSD.

"The old target was, by 2025 a reduction of 25 percent. Now by 2030 we increased that reduction percentage to 30 percent. And the main contributor to these diseases is not from developed countries. But from developing countries like us, ASEAN countries. So the world wants to target their focus to ASEAN," concluded Dr. Antonia.