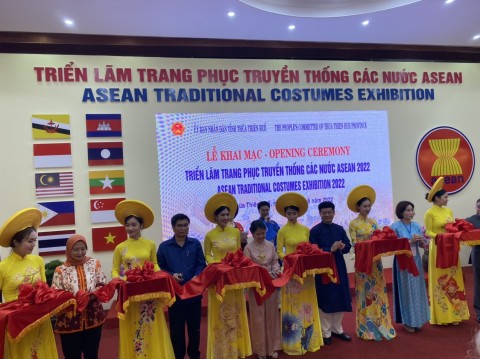 ASEAN Traditional Costumes Exhibition (Photo: KBRI Hanoi)
Jakarta: The Indonesian Embassy in Hanoi and Embassies of the ASEAN member countries in Vietnam jointly participated in the "ASEAN Traditional Costumes Exhibition" at the invitation of Thua Thien Hue Provincial People's Committee which lasts from June 25 to June 30 at the Cultural and Cinema Center of Thua Thien Hue province.

"It is one of the legendary costumes of the Minangkabau ethnic group in West Sumatera province, Indonesia to showcase at this Exhibition," the Indonesian Embassy said in a press release on Monday.

Bundo Kanduang costume is associated with female leadership and the wisdom of the female elders.

Bundo Kanduang costumes are worn by married women and men for the occasion of traditional and national ceremonial activities, religious or national day ceremonies, festivals, and other important events.

In addition, the Embassy also displayed 5 photos of the country's landscape, festivals and cultural activities.

"The ASEAN Traditional Costumes Exhibition is held within the framework of Hue Festival Week 2022 and towards the 55th anniversary of the establishment of ASEAN," it stated.

"This event aims to introduce the beauty of the countries, culture and people of ASEAN; enhance mutual understanding among people of the countries in the region and the world; contribute to expanding economic cooperation, investment, and cultural exchange; and promote tourism development," it concluded.