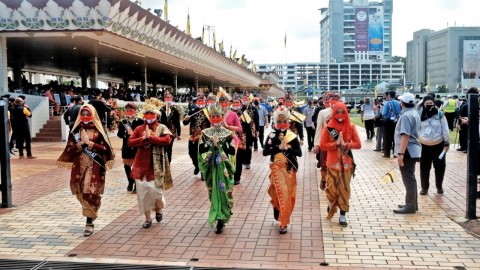 The Indonesian citizens in Brunei also participated in the celebration, represented by the Indonesian Embassy staff in collaboration with the Indonesian Community Association (PERMAI).
BERITA TERKAIT

The hot weather did not dampen the participants' spirit.

"Also watching from the tribun with the Sultan are, Heads of Mission in Brunei, including the Indonesian Ambassador to Brunei Darussalam, Dr. Sujatmiko accompanied by Mrs. Nani Sujatmiko," the Indonesian Embassy in Bandar Seri Begawan said in a press release on Wednesday.

Ambassador Sujatmiko expressed his pride for Indonesian community which continues to enliven the National Day Parade every year while exhibiting the richness of Indonesian culture, especially traditional clothes of various shapes and colors.

Perbarisan Kebangsaan is an annual parade held to celebrate Brunei's National Day which falls on 23 February.

According to the health protocol in force in Brunei, this year's parade was held on a smaller scale than the previous years.

This year's parade was attended by 161 groups / delegations with a total number of participants of 3.800 people consisting of military, government, private, school and local and foreign communities.

The limitation on participants also has an impact on the number of participants from the Indonesian community, which this year is only 36 people.

Apart from Indonesia, the foreign communities who participated in the parade this time were the Malaysian, Filipino, Thai and Indian communities.