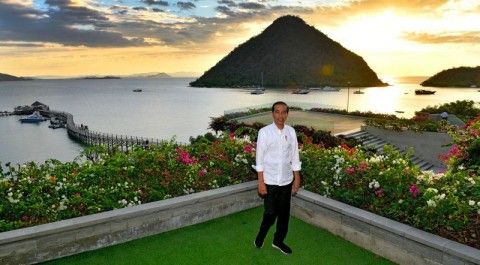 "Why am I and these ministers here in NTT for? We want to build Labuan Bajo. The airport, starting this year, the foundation will be extended, the waiting terminal will also be enlarged and repaired," Jokowi told people who were present at the ceremony to hand over certificates of land rights on Tuesday, January 21, 2020, in West Manggarai Regency, NTT.

According to him, Labuan Bajo needs to be improved so that tourists from foreign countries who come can enjoy the cultural atmosphere in Labuan Bajo. On a number of occasions, Jokowi has always said that Indonesian tourism is able to transform into a major sector in driving the national economy.

When tourism is developed, it is certain that employment will increase so that the community's economy will also develop. According to him, the visit of foreign tourists can increase the revenue of Labuan Bajo up to 10 times compared to before.

Therefore, supporting tourism infrastructure must also be built. Both basic infrastructure and tourism support in the area were built and improved as soon as possible.

"Not only the airport, soon the roads and sidewalks here will also be improved. Raw water will also have dams which we hope will be completed soon. We will also build a waste processing plant here. Later, we will see changes at Labuan Bajo, "he said.

Development and improvement of the infrastructure, according to him, must be accompanied by the readiness of human resources who will later be in direct contact with foreign tourists in attendance. Related to this, Jokowi hopes that Indonesian hospitality will imitate the face and wisdom of Indonesian culture in the eyes of the world.

"But I ask, especially those around Labuan Bajo, everything must be prepared. Friendly to tourists and no littering. This is what we must start to present in Labuan Bajo," he said.