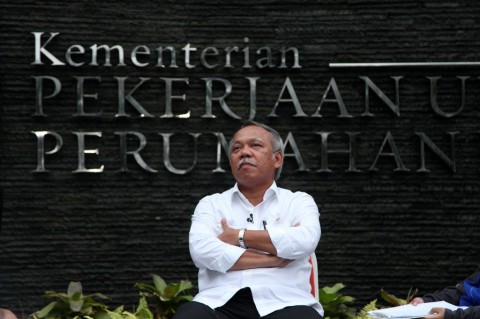 "The Benteng Pendem area is a cultural heritage site, so revitalization must be conducted prudently to ensure the preservation of cultural values of the fort," Minister of Public Works and Public Housing Basuki Hadimuljono noted in his statement received here on Monday.
BERITA TERKAIT

Hadimuljono spoke of having instructed contractors to plant more trees to prevent the tourism destination from turning into an arid area and to ensure that the environmental and cultural aspects are maintained during the revitalization process.

The adaptive reuse concept has been applied while conducting revitalization of the Fort Van den Bosch, the minister revealed while elaborating that the concept aims to adjust the cultural heritage structure for new purposes while preserving the cultural significance and physical form of the building, albeit with structural reinforcement.

The Benteng Pendem revitalization commenced on October 10, 2022, with the involvement of East Java's Cultural Heritage Preservation Office, he stated.

The revitalization process is conducted by PT Nindya Karya (Persero) contractor, with a total contract value of Rp113.7 billion (US$7.95 million), for the rehabilitation of 13 structures within the Fort complex, Hadimuljono noted.

He remarked that the 13 structures within the Fort Van den Bosch complex are the soldier barrack, officers' dwelling, a large kitchen, the general's office and dwelling, the fort's bastion, and the fort's gate. Apart from structural rehabilitation, new roads, drainage systems, pedestrians, and landscape works are also being conducted in the project, he added.

Work on the project has reached 75-percent completion and is expected to be ready in January 2023 in accordance with the timetable, the minister stated.

Meanwhile, Director of Building Revitalization of the ministry's Human Settlement Directorate General Boby Ali Azhari noted that the revitalization of Benteng Pendem aims to maintain the conditions of the culturally-important structure that has been standing since the 1840s and to bolster the tourism potential in Ngawi District.

"Visitors would have their first impression (of the fort) from the entrance point, and historical photographs must be placed at that point. It is fine if we are not constructing a new bridge as long as the waterway would not be obstructed," Azhari remarked.

Fort Van den Bosch is located on the Untung Surapati Road, Ngawi District, East Java. The tourism attraction, situated some three kilometers from the city centre, is at a two-hour distance east of the province's capital, Surabaya.