Australia Tops List of Countries with Most Travelers in Bali: Tourism Minister 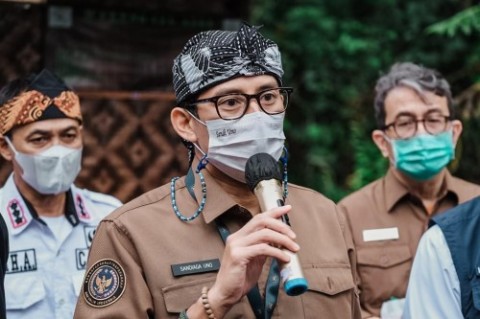 The five countries with the most tourists to Bali in April were Australia, the United Kingdom, Singapore, the United States, and France.
BERITA TERKAIT

"We continue to collaborate with international airline companies to increase the quantity and schedule of flights to Indonesia, especially Bali," the minister said.

In March this year, international tourist arrivals at Bali showed a significant increase of 1,030.47 percent compared to the previous month, he informed.

According to Uno, the Ministry of Tourism and Creative Economy is implementing a promotional program under an integrated cooperation scheme with airline companies.

One form the cooperation has taken is helping tourism industry players to participate in the Arabian Travel Market (ATM) in Dubai and South Asia's Travel & Tourism Exchange (SATTE) in India, he informed.

"These activities are expected to have a positive impact by increasing foreign tourist visits to Indonesia and encouraging the international aviation industry," Uno said.

With several relaxation policies implemented, such as the scrapping of PCR and antigen mandatory tests and the easing of the mask mandate, the ministry is also pushing international airlines to add more flights to Indonesia by opening more travel routes.

"The policy without PCR is considered necessary to increase tourism competitiveness with neighboring competitor countries such as Singapore, Malaysia, and Thailand that first enacted the policy, thus impacting national economic recovery, especially in the tourism sector," Uno said.

The government's decision to ease the mask-wearing policy in open spaces is based on the controlled COVID-19 situation in Indonesia, President Joko Widodo (Jokowi) said on May 17, 2022.

However, the easing of the rule on wearing masks only applies outdoors and not in closed rooms or mass transportation, he added.