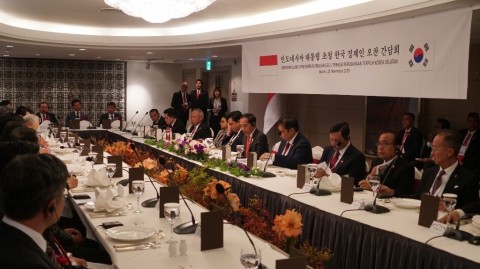 This was conveyed by Jokowi when meeting with CEOs of leading South Korean companies, at Lotte Hotel, Busan on Monday afternoon, November 25, 2019.
BERITA TERKAIT

"We will design the new capital city as a smart city, a green city, a safe city, an inclusive city, and a resilient city," President Jokowi said, as reported by the Cabinet Secretariat on Tuesday, November 26, 2019.

He believes that South Korea is one of Indonesia's strategic partners . He also invited CEOs of large South Korean companies to strengthen economic cooperation between Indonesia and South Korea.

"South Korea is a special strategic partner of Indonesia and is the sixth-largest investor for Indonesia," Jokowi said.

According to him, in the next five years, the investment climate will be more attractive. In addition, the bureaucratic reform will also continue.

"This year we will soon introduce what is called the Omnibus Law, cutting about 70 to 74 laws simultaneously. With this Omnibus Law, we hope that all the regulations that hamper job creation and investment will be simplified," he concluded.