Indonesian Exports to Switzerland Soar in First Quarter of 2022 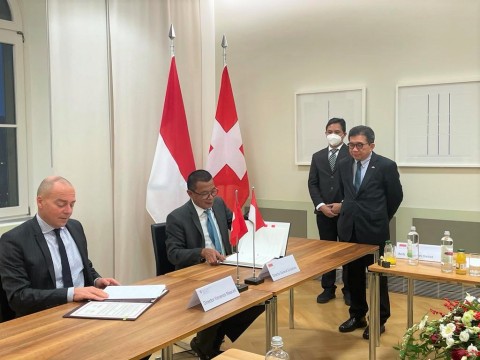 "This is certainly a significant progress for the economic relations between Indonesia and Switzerland, not only because of the improved distribution channels, but also because of the optimism that has developed after Indonesia - EFTA CEPA since late last year," said the Indonesian Ambassador to Switzerland and Liechtenstein, Muliaman Hadad, in a press release on Wednesday.

Ambassador Muliaman is optimistic that economic relations between Indonesia and Switzerland will continue to improve, especially in the trade and investment sectors, even though the world economy is still experiencing uncertainty due to the war in Ukraine, supply bottlenecks and the unpredictable and unpredictable pandemic situation.

In the midst of global economic uncertainty, the Swiss economy is still doing well. The Swiss National Bank (SNB) reports that in 2022, Switzerland's GDP will increase by 2.5%.

Switzerland itself does not have direct economic ties to Russia and Ukraine, but for a country that relies heavily on foreign trade, such as Switzerland, the Ukraine war has resulted in an increase in world commodity prices, which causes the company's production costs to be higher. The SNB reported that inflation in Switzerland in February 2022 reached 2.2%.

Data from the Ministry of Investment/BKPM shows that in the first quarter of 2022, Switzerland ranks 5th from the European continent and 20th of all countries investing in Indonesia. The number of projects has reached 152 with a value of 15.7 million US dollars.

This investment cooperation will continue to increase with the signing of the Bilateral Investments Treaty and other cooperation which will be discussed during the World Economic Forum (WEF) on 22-26 May 2022 in Davos, Switzerland.

"This year's World Economic Forum, which coincides with the G20 presidency, will be the right momentum for Indonesia to show commitment and seriousness to explore the potential that emerges from the G20 priority agenda," Muliaman added.

As is well known WEF is a global platform in the economic, social and political sectors located in Davos Switzerland. Every year, the event is attended by more than 2500 participants from more than 100 countries consisting of world politicians, influencers, CEOs of leading companies, business people, actors, researchers and several world heads of state.