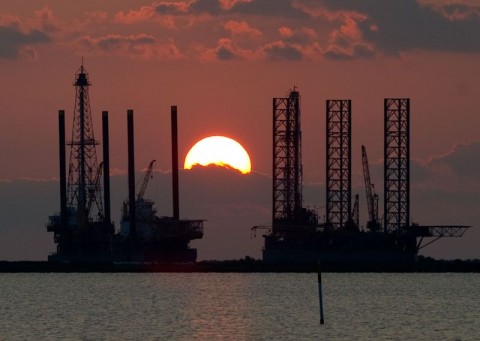 The US president announced in a tweet that he would make an announcement at 1800 GMT on whether or not to tear up the agreement with Tehran and reimpose painful sanctions that could cut off crude supplies.

Despite being urged by world leaders to keep it in place, there is a general consensus that he will refuse to preserve the 2015 pact, fanning fears of fresh turmoil in the already tinderbox Middle East.

This -- along with an output cap by Russia and OPEC, rising US demand and an improving economy -- has helped send the price of oil to highs not seen since late 2014, though profit-taking saw both main contracts retreat Tuesday.

"Oil has raced higher recently on the back of concerns that president Trump will exit the US from the Iran nuclear deal and that this would then lead to a further deterioration in the situation in the Middle East not to mention the disruption to oil supplies of Iran's production," said Greg McKenna, chief market strategist at AxiTrader.

He added that there was a "perfect storm for higher prices" owing to as crude-rich Venezuela's economic woes, which have been made worse by fresh US sanctions.

However, Stephen Innes, head of Asia-Pacific trade at OANDA, said "we could be on for significant knee-jerk reaction (sending prices down) if the president walks back the more boisterous elements of hawkish Iran rhetoric".

Iran has said Washington will regret it "like never before" if Trump walks away from the deal.

The Hang Seng piled on more than one percent, while Shanghai gained 0.7 percent, Tokyo finished the morning 0.3 percent higher and Sydney added 0.4 percent.

On currency markets, the dollar held around its 2018 highs against the euro following a recent run of below-par data out of the eurozone that has fed speculation the European Central Bank may have to put on the back burner plans to wind in its crisis-era stimulus.

That comes as the US economy continues to improve, fuelling talk of three or four interest rate hikes this year.

However, traders remain on edge over the China-US trade spat, with the failure last week of talks in Beijing causing concern.

Oil - West Texas Intermediate: DOWN 63 cents at USD70.10 per barrel