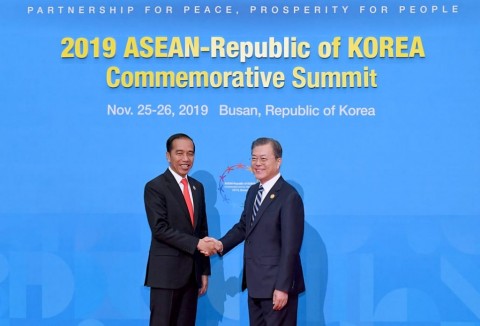 "There, the leaders will discuss the evaluation of 30 years of cooperation and what leaders want to do for the next 30 years," Foreign Minister Retno Marsudi said on Tuesday, November 26, 2019.
BERITA TERKAIT

According to reports, Jokowi will visit the Busan Exhibition and Convention Center (Bexco). In addition that,  he will also attend the ASEAN-RoK Start-up Summit and the 2019 ASEAN-RoK Innovation Showcase.

After the forum, Jokowi will then attend a banquet between South Korean President Moon Jae-in and ASEAN leaders in the APEC Nurimaru House. From the lunch location, Jokowi will go to the Hyundai Motor Company factory in Ulsan.

He will see the condition of the automotive industry in South Korea. After that, President Jokowi and his entourage will head for Gimhae Air Force Base to return to Indonesia.

In the ASEAN-RoK Summit, Jokowi invited ASEAN countries and Korea to develop renewable energy. According to him, Indonesia has launched the B20 biodiesel program.

"Next year we will require an increase in the biodiesel mixture to 30 percent or B30. Indonesia is currently also developing water-based electricity, "Jokowi said on Monday, November 25, 2019.

"By using hydropower, our industrial development will generate fewer emissions," he said.

This effort, is part of the Indonesian government's commitment to the Paris Agreement to tackle climate change. President Jokowi also reminded them that the challenges to be faced in the future will be even tougher.

"The courage to make a breakthrough in the age of disruption is the only option for us to be a winner. I invite ASEAN and Korean businessmen to take this path," he explained.