BI is Confident that Indonesia's Economy will Improve in 2020 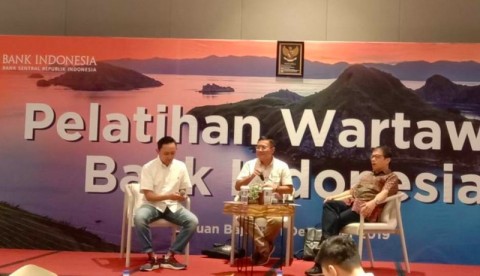 Bank Indonesia DKEM Executive Director Endy Dwi Tjahjana (center). Photo: Medcom.id/Angga Bratadharma
Labuan Bajo: Bank Indonesia (BI) said the overall outlook for Indonesia's economy in 2019 is quite good and is expected to continue to improve in 2020. In this context, economic recovery in the country is believed to increase higher in the medium term, as economic conditions improve.

"The prospect of our domestic economy as a developing country related to inflation of three percent can be said to be equivalent to other countries. We hope to be able to control inflation going forward," Endy said, in a Bank Indonesia Journalists Training, Labuan Bajo, East Nusa Tenggara (NTT) on Monday, 9 December 2019.

On the other hand, Endy emphasized that financial system stability was maintained. In September 2019, he continued, the Financial System Stability Index (ISSK) and the Banking Systemic Risk Index (IRSP) were maintained in the normal zone supported by high financial market conditions and bank capital.

Furthermore, Endy continued, the transmission of monetary policy continued. The weighted average deposit rate fell by 12 bps compared to September 2019 so that it was recorded 6.45 percent in October 2019. Then the credit interest rates began to decline, especially in investment loans and working capital loans, each recorded 10.04 percent and 10.26 percent.

"Meanwhile, credit growth slowed from 8.59 percent year on year (yoy) in August 2019 to 7.89 percent (yoy) in September 2019, mainly influenced by the demand for corporate loans that have not been strong," he concluded.