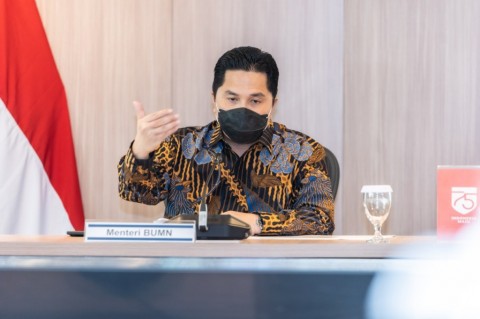 Construction activities must continue to be implemented, not only to strengthen domestic connectivity but also to help Indonesia grow during and after the pandemic, the minister noted in a statement here on Sunday.
BERITA TERKAIT


"After all, we must be able to get out of the crisis caused by the pandemic and continue to strengthen cooperation with various parties," Thohir remarked.

Waskita and CCCC have inked a master agreement on forming a strategic alliance for the development of transportation infrastructure and other industries in Indonesia.

Through this agreement, Waskita and CCCC remain committed to creating synergies with the principles of mutual benefit, efficiency, effectiveness, and professionalism.

The cooperation between both companies encompasses the development of transportation infrastructure and other industries, such as the Kayu Agung-Palembang-Betung Toll Road project, the Ciawi-Sukabumi Toll Road, the Cikampek-Plumpang fuel distribution pipeline, and the revetment wall of Bali's Benoa Port.

Waskita President Director Destiawan Soewardjono affirmed that the cooperation was one of the company's strategies to create positive business growth potential after the COVID-19 vaccination program.

"The construction and infrastructure sectors are among vital sectors to boost national economic growth," he stated.

"By establishing synergies with a large infrastructure developer, such as CCCC, the benefits of creating added value are not only for the two companies but also for the countries and societies," he remarked.

In line with the spirit of the Ministry of SOEs to build strong partnerships between SOEs and the private sector, he expressed intent to explore more infrastructure development opportunities that could be synergized with foreign partners, such as the CCCC and others.

CCCC is a Chinese state-owned enterprise engaged in investment, design, construction, and transportation infrastructure. As of December 31, 2020, CCCC's assets had reached a total value of US$ 204 billion.