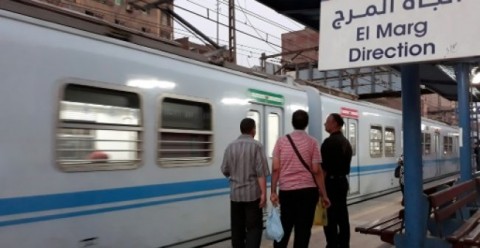 People queue to get on a train at a metro station in the Egyptian capital, Cairo, on May 28, 2018. (Photo:AFP/Khaled Desouki)
Cairo: While Egypt's economy is displaying the green shoots of recovery, citizens are enduring relentless price rises covering everything from water to metro tickets.

"The burden has become too heavy, it has become unbearable," she said, dressed in a black full-length dress with her hair covered.

Standing alongside her teenage son, Mohamed said she was especially worried about her daughter who takes the metro to work at a private hospital.

"The rise in ticket prices has hit her especially, with her modest salary," she said.

On top of the metro fare, Mohamed's daughter is one of many Cairo residents who has to take tuk-tuks and microbuses to work.

On May 11 a uniform two-pound ($0.11) metro ticket was replaced with fares ranging from three to seven pounds. Barely a year ago, fares cost just one pound.

The latest fare rises brought street protests last month, a rare occurence under President Abel Fattah al-Sisi who has been criticised for a crackdown on social dissent.

Around 30 people were arrested in the May protest, with some later freed.

'The burden will double'

Egypt's austerity policies are tied to $12 billion in loans from the International Monetary Fund, secured by Cairo to ease a fiscal crisis that saw its deficit balloon to 12.5 percent of GDP in 2015/16.

On Saturday, the government announced a hike in drinking water prices that in some cases exceed 45 percent.

Further measures are to come, with energy prices due to rise in July.

"The burden will double", said Mohamed.

Officials are repeatedly warning of more electricity price hikes and a reduction in fuel subsidies, prompting media outlets to prepare the public for the changes.

The government has yet to announce the scale of the next price increase and cut in subsidies.

"The Egyptian people have suffered many shocks in the last two years in consecutive price increases," she said.

The rising costs come against a backdrop of economic recovery, with GDP growth increasing in the past year from 4.2 percent to 5.2 percent.

Meanwhile, inflation eased to 12.9 percent in April, after reaching a peak of 34.2 percent last July.

The unemployment rate dropped to 10.6 percent in the first three months of 2018, against 12 percent a year earlier, according to the government's statistics bureau.

Despite the positive figures for the national economy, price rises have disproportionately affected low earners according to Omar Adly from the American University in Cairo.

"There are other means to reduce the budget deficit which could reduce the pressures on the poor and lower middle income-class," such as tax rises, said Adly, a development professor.

But the IMF contends that the bitter reform medicine will benefit everyone.

"While the process has required sacrifices in the short-term, the reforms were critical to stabilise the economy," the lender said on May 17.

Such an economic overhaul will "lay the foundation for strong and sustained growth that will improve living standards for all Egyptians," the IMF added. (AFP)