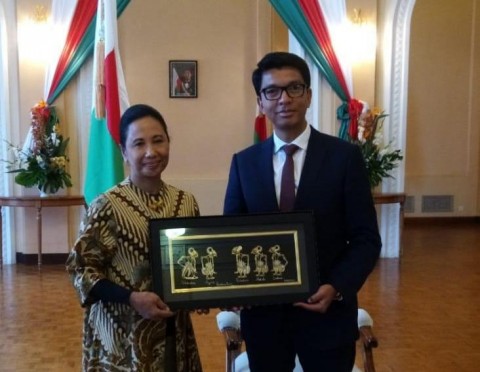 Minister Rini said this visit was a direct instruction by President Joko "Jokowi" Widodo in helping the infrastructure development of African countries, one of them being Madagascar. According to her, Madagascar has close ties with Indonesia.

"Indonesia has published a new book about the brothers in Africa, and Insyaallah Madagascar will be the first page. Because Madagascar is not only geographically closest, but also related by blood," Minister Rini said in an official statement released on Wednesday, September 18 2019.

She stressed that Madagascar need not hesitate to cooperate with Indonesia. Stating that Indonesia is ready to help and already has both the experience and expertise needed by Madagascar to develop its country, Indonesia also does not demand anything except conditions of cooperation that are open, fair and mutually beneficial.
BERITA TERKAIT

"Indonesia promises a beneficial cooperation because unlike other countries, Indonesia does not have hidden motives in this part of the world. Indonesia just wants to advance together, especially with Madagascar towards a better future in a spirit of brotherhood and solidarity between our two developing countries," she said.

In addition to meeting with the President of Madagascar, Minister Rini also held a meeting with Madagascar's Minister of Trade, Industry and Crafts Lantosoa Rakotomalala. This meeting discussed opportunities for cooperation in the industrial sector, including the provision of agricultural machinery and the development of small industries.

"For agricultural machinery, PT Barata Indonesia (Persero) and PT Pindad (Persero) will be tasked to work on it. We follow up on President Jokowi's instruction so that SOEs can become players in the international world," explained Minister Rini.

Minister Rini added that PT Angkasa Pura II (Persero) and PT Wijaya Karya (Persero)  will also explore the plan for collaborative management and development of airports in Madagascar. In addition to Madagascar, Indonesian SOEs will collaboratively begin to open up opportunities in Tanzania.

"President Andry is also pleased with the cooperation and investment from SOEs in the country. SOEs have begun operating in Algeria, Nigeria, Niger and exporting aircraft to Senegal," she concluded.