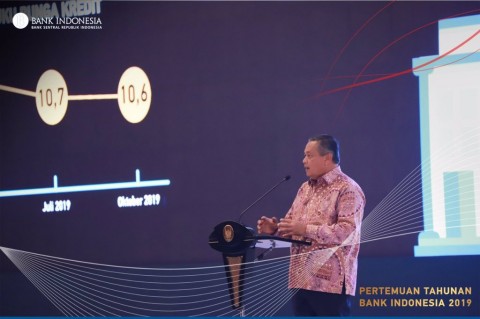 He said this before President Joko “Jokowi” Widodo and several banking players at the 2019 Bank Indonesia Annual Meeting.
BERITA TERKAIT

According to Perry, it is time for banks to reduce lending rates in line with the reduction in benchmark interest rate that has been carried out by the central bank so far.

"We expect banks to accelerate the reduction in lending rates," Perry said, at the 2019 Bank Indonesia Annual Meeting, at the Raffles Hotel, Jakarta on Thursday night, November 28, 2019.

Perry ensured the adequacy of bank liquidity going forward. The central bank will also continue to implement accommodative monetary policies in 2020.  Based on these policies, it is hoped that banks will immediately reduce their lending rates.

Based on data from Bank Indonesia until September 2019 lending rates have begun to decline, especially in investment loans and working capital loans, each recorded at 10.04 percent and 10.26 percent.