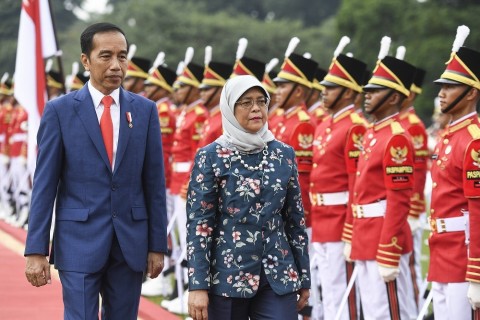 Indonesia and Singapore also agreed on cooperation between the Directorate General of Customs and the Singapore Police Coast Guard and training cooperation for a number of regional heads from Indonesia.
BERITA TERKAIT

The next agreement is an extension of the repurchase agreement in November 2019 between Bank Indonesia and the Monetary Authority of Singapore. "The fifth is the realization and strengthening of cooperation in industrial training 4.0," Jokowi said at the Bogor Presidential Palace, West Java on Tuesday, February 4, 2020.

Indonesia and Singapore also discussed the continued cooperation in the field of investment and human resource development. Jokowi said that Singapore has become the largest source of investment in Indonesia since 2014.

"I really appreciate Singapore's commitment to continue investment cooperation including infrastructure projects in Indonesia," he said.

"Cooperation training for polytechnic lecturers is facilitated by Singapore and the Ministry of Industry of the Republic of Indonesia. Then, education and research and development cooperation between universities of the two countries," Jokowi said.