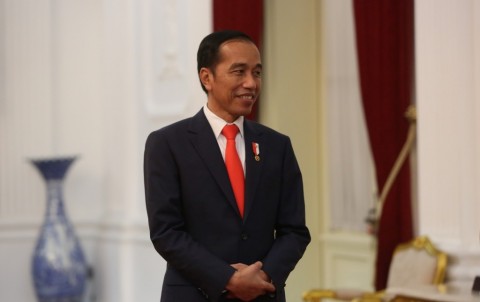 President Joko Widodo (Photo:MI/Ramdani)
Jakarta: President Joko “Jokowi” Widodo will be the keynote speaker at the Abu Dhabi Sustainability Week (ADSW) on Monday, January 13, 2020. Many topics can be raised during the forum.

"This is a prestigious event about sustainability, not only regarding the environment but also how the economy is sustainable, sustainable technology, and so on," said Minister of State Secretary Pratikno in Jakarta on Sunday, January 12, 2019.
BERITA TERKAIT

Pratikno explained that sustainable development is an important issue in the world. On the other hand, Jokowi will also convey the plans regarding Indonesia's new capital.

"With this new capital city, the President wants to invite the international community to make this new capital of Indonesia a showcase, an example to the world about becoming a sustainable city with all its aspects," Pratikno explained.

Jokowi, he said, will also talk about innovation and creativity driving the economy. The vision of Indonesia in the future regarding sustainable development will be illustrated through an explanation of the new capital city.

After that, the President will head for the Abu Dhabi International Airport Presidential Terminal. Jokowi will take off back to Indonesia. The president and his entourage are planned to arrive in Jakarta on Tuesday morning, January 14, 2020.