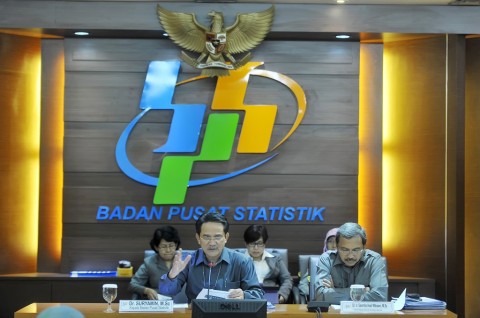 Central Statictic Agency (BPS). (Photo: Antara / Yudhi Mahatma)
medcom.id, Jakarta: The Central Statistics Agency (BPS) recorded that Indonesia's trade balance during August 2015 experienced a surplus of US$433.8 million. The export value during the month reached US$12.7 billion, while the import reached US$12.27 billion.

Suryamin explained that if compared by the previous month, the August achievement has risen by 10.79 percent. However, August 2015's export have decreased by 12.28 percent from August last year (yoy) at US$14.48 billion.

In the mean time, the import value, Suryamin stated, experienced an increase by 21.69 percent compared to July 2015. If it is compared to August in the previous year, the import decreased by 17.06 percent.