Pertamina Signs Head of Agreement with Total, Inpex on Mahakam 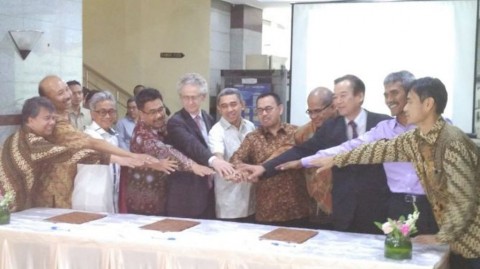 The signing of Head of Agreement between Pertamina, Total and Inpex on Mahakam block, Wednesday (12/16/2015) (Photo: MTVN/Annisa Ayu Artanti)
medcom.id, Jakarta: PT Pertamina , Total E&P Indonesie and Inpex Corporation on Wednesday (12/16/2015) signed Head of Agreement (HoA) on basic principles agreement as preparation for Mahakam block takeover when Total and Inpex's contract ends in 2017.
Pertamina's Upstream Division Director Syamsu Alam said government has decided it will not extend the contract when it runs out in December 31. 2017 and Pertamina appointed to manage the oil and gas block after 2017. As a consequence, Pertamina must make coordination with Total and Inpex for the takeover.
"HoA that has been signed today (yesterday) is preparation for the takeover which consists of basic principles that will be followed with definitive agreement. This agreement is very positive and a progress for the takeover when the contract ends in 2017," said Syamsu, in Directorate General of Electricity, Jakarta, Wednesday (12/16/2015).
The HoA mainly consists of two agreements namely transfer agreement and commercial agreement. Syamsu explained transfer agreement is needed to ensure operational transition goes well. While, commercial agreement ensures the completion of partnership composition in the new contract between Pertamina, Total an Inpex.
In principle, the new contract should give benefit to the country and Pertamina through the development of Mahakam block," he continued.
Regarding participation from local government in Mahakam block, it will be finalized when the definitive agreement is signed.