Govt to Clean Up Oil and Gas Mafia 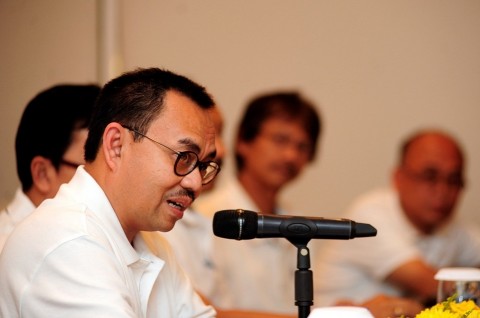 Minister of ESDM, Sudirman Said. (Photo: Antara/Wahyu Putro A)
medcom.id, Jakarta: The government, in this case the Ministry of Energy and Mineral Resources (ESDM), promised to clean out the oil and gas mafias, which are the blow up of the raw oil import budget in Indonesia.

Minister of ESDM, Sudirman Said, stated that following the revealing of oil mafias, it will give a direct impact on the cheaper purchases of imported oil. It happens as the frauds were discovered, as the interruptions on the tender and leaking the prices by using the instruments of Pertamina management employees for their interests.

"We can get better discount, where as previously the imported oil price was held hostage," said Sudirman in the press conference at Dharmawangsa Hotel, Jalan Wijaya, Jakarta, Sunday, November 8.

Throughout the times, due to the oil mafia occurring within the sub-company of PT Pertamina (Persero), Pertamina Energy Trading Limited (Petral), had made the sale price of imported oil to reach US$1.3 per liter, up to US$1.5 per liter.

However, Sudirman was sure that after the investigation and forensic audit of Petral being conducted and oil mafia was discovered, it is hoped that the oil price may decrease. On the law enforcement, Sudirman explained that his team is reviewing it. After it is considered as completing requirements, the ESDM Ministry  will not hesitate to bring the oil mafia case to the legal sector.

"On the law enforcement, we are reviewing with our law enforcement. We are sure that the report has passed the requirements for projusticia. If it is clearly indicated as violating the law, we will not hesitate. Generally crime can't be hidden forever. It will be revealed at a point," he stated.

Previously, the investigation audit of Petral stated that several singularities were found on the Petral documentation. It is recorded that within the documentation, there were third parties involved in the procurement of raw oil purchase and sales throughout the years.